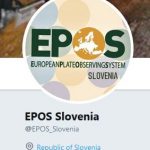 Milestones in the cooperation of Slovenia with EPOS

Slovenia will be one of 6 countries in establishment of EPOS-ERIC.